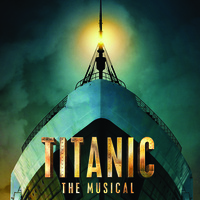 THIS EVENT HAS BEEN POSTPONED

Music and Lyrics by:  Maury Yeston

Story and Book by:  Peter Stone

TONY AWARD WINNER - BEST MUSICAL!
The sinking of the Titanic in the early hours of April 15, 1912, remains the quintessential disaster of the twentieth century. A total of 1,517 souls—men, women and children—lost their lives (only 711 survived). The fact that the finest, largest, strongest ship in the world—called, in fact, the “unsinkable” ship—should have been lost during its maiden voyage is so incredible that, had it not actually happened, no author would have dared to contrive it.  An epic, sweeping musical drama, Titanic examines the causes, the conditions, and the characters involved in the ever-fascinating drama of the RSS Titanic. This is the factual story of that ship—of her officers, crew and passengers, to be sure—but she will not, as has happened so many times before, serve as merely the background against which fictional, melodramatic narratives are recounted. The central character of our Titanic is the Titanic herself.  Titanic features some of the most beautiful music ever heard on Broadway is certain to captivate history lovers and musical theater fans alike, leaving audiences spellbound in its wake!  Please note that this is a fact based musical and is not based on the James Cameron film.  Mature subject matter

Visit Our Website at: www.utep.edu/udt For Ticket Prices and Directions