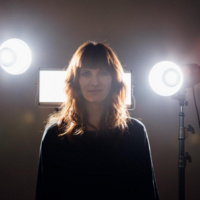 Sooner Rae Routhier is an award-winning Designer, Producer, Director, and one of today's leading creative minds in the world of experiential entertainment.  She has developed and produced some of entertainment's most recognizable performance moments for some of today's biggest headlining artists including, Coldplay,The Weeknd,KISS,Imagine Dragons, The Lumineers, Rhianna, Pentatonix, Jay-Z,Halsey, Motley Crue,  G-Eazy, and Depeche Modejust to name a few.

Sooners incredible story began in 1999 where she worked as a lighting technician and lighting director for Rainbow Concert Productionswhile attending Emerson College in Boston.  After graduating in 2001 with BFA in Technical Theater, she launched her career as a Lighting Designer for the rock band Chevelle.  Her talent and grit were quickly recognized in the industry allowing her to collaborate and design for some of the industry’s leading live and televised events.

In 2007 Sooner teamed up with legendary production manager Robert Longto form SRae Productionsand embarked on a journey to redefine entertainment.  She did just that, in 2015, Sooner was awarded a prestigious Parnelli Awardfor her lighting design on the Imagine Dragons Smoke and Mirrors Tour.  While growing SRae Productions, Sooner was also able to cultivate new budding creative talent under her SRae umbrella and in 2017, Sooner and the SRae team joined forces with World-Renowned Composer Ramin Djawadiand together in a Live Nation/ HBOpartnership brought the world of Westeros to life and launched the "Game of Thrones – Live Concert Experience."

Sooner has not only made her mark in entertainment industry, but she has also become a respected leader in her field and along with her colleagues helped pave the modern landscape of entertainment lighting, design, and production.

These workshops will also serve as this year’s UTEP Technical and Performance Workshops (UTPW). Due to the pandemic, we cannot offer our normal on-campus workshops, however, combined with online acting seminars and Dean’s Speakers Series, we will create a mailer package with links to all of these workshop videos for local high school students and teachers. It is my hope that by sharing these powerful workshops as a community outreach and service, we will keep inspiring the young artists of El Paso.