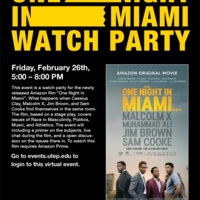 One Night in Miami Watch Party

This event, hosted by the Black Affinity Group, is a watch party for the newly released Amazon film "One Night in Miami". What happens when Cassius Clay, Malcolm X, Jim Brown, and Sam Cooke find themselves in the same room. The film, based on a stage play, covers issues of Race in Masculinity, Politics, Music, and Athletics. The event will including a primer on the subjects, live chat during the film, and a open discussion on the issues there in. To watch this film requires Amazon Prime.

This event will be hosted on Microsoft Teams and is open to the public. Anyone can use the link to join us.

Link to the Meeting Room