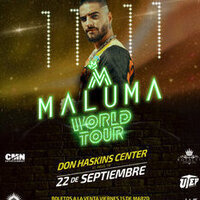 Global Latin music idol MALUMA who has been selling out concerts throughout the world, has just announced his return to the United States, Canada and Puerto Rico with the North American leg of his 2019 MALUMA 11:11 WORLD TOUR, which kicks off on September 6th in San Diego, California and will make stops in more than 21 cities including venues such as the AmericanAirlines Arena in Miami, Madison Square Garden in New York and The Forum in Los Angeles.

"I couldn't be more excited to announce my return to the United States and Puerto Rico as well as my first concert in Canada. This will be my third North American tour and I come with a brand new show full of surprises for my fans and new music off my upcoming album 11:11 which is due out later this year," expressed Maluma.

At just 25 years of age, Maluma has taken the world by storm with his live shows. He is the Latin artist that sold the most concert tickets in 2017, filling venues throughout Latin America, Europe, the US and Brazil and he had a hugely successful USA tour in 2018 which included 22 sold-out shows and 200,000 tickets sold. In 2019, he returns to the United States, Canada and Puerto Rico for more.