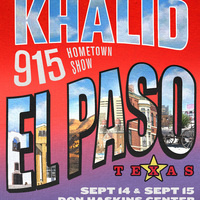 GRAMMY® nominee and 20-year-old acclaimed singer-songwriter Khalid revealed a special hometown show in El Paso, TX. The sold-out concert event is set to take place Sept. 14 and 15 at UTEP Don Haskins Center in the heart of the city.

This past year Khalid has performed around the country as part of “The Roxy Tour,” his third North American headlining trek. The outing was inspired by Khalid's late puppy Roxy, who he rescued from a Los Angeles-based animal shelter, but tragically passed away. Khalid is passionate about using his platform to support animal rights and finding safe, humane environments for animals to live. A $1 donation per every ticket sold to the El Paso show will be given to a local animal shelter, as was the case throughout the full run of the tour.

Start at $29.20 plus any applicable fees