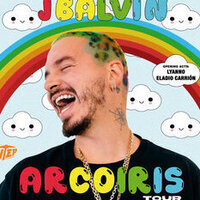 Following his widely praised, back-to-back weekend performances recently on the main stage at Coachella, Reggaeton’s leading global ambassador J Balvin announces his highly anticipated fall North American tour. Balvin’s history making Coachella debut was just a first glimpse of what fans can expect on the upcoming “Arcoiris Tour “– with multiple chart-topping hits and groundbreaking visual production, which will be brought to life once again by the Colombian superstar and the FriendsWithYou Art Collective.

Produced by Live Nation, the 25-city trek will kick off on August 30th in San Juan, Puerto Rico, and make stops in Miami, Toronto, New York City, Las Vegas and more before wrapping on October 26th in Los Angeles, CA. Tickets go on sale to the general public beginning Friday, May 17th at 10am local time at Ticketmaster.com. American Express® Card Members can purchase tickets before the general public beginning Tuesday, May 14th at 10am local time through Thursday, May 16th at 10pm local time.
J Balvin’s “Arcoiris Tour” will also feature support appearances from two fast-rising young Puerto Rican music stars with the seemless Reggaeton and Latin Trap fusion of Lyanno, and the wide ranging musica urbano versaltility of Eladio Carrion.