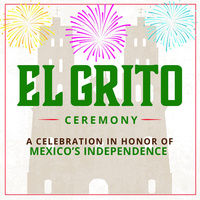 The commemoration of the Mexican cry for independence, originally called “Grito de Dolores” and now commonly known as “El Grito,” is held annually in remembrance of the Mexican War of Independence that started Sept. 16, 1810.

The ceremony will close with a performance by the Mariachi Femenil Flores Mexicanas.

Free handheld Mexican flags will be passed out before the ceremony to the first 150 attendees, and refreshments will be available.