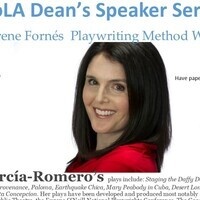 Anne García-Romero’s plays include: Staging the Daffy Dame, Lorca in New York, Mary Domingo, Provenance, Paloma, Earthquake Chica, Mary Peabody in Cuba, Desert Longing, Juanita's Statue, Girlus Equinus and Santa Concepcíon. Her plays have been developed and produced most notably at the New York Shakespeare Festival/Public Theatre, the Eugene O'Neill National Playwrights Conference, The Goodman Theatre, Denver Center Theatre, The Mark Taper Forum, Hartford Stage, Borderlands Theater, National Hispanic Cultural Center, Nevada Repertory Company, Los Angeles Theatre Center, Kitchen Theatre, and South Coast Repertory. She has also written for Peninsula Films, Elysian Films and Disney Creative Entertainment. Her translation of The Gröholm Method by Jordi Galcerán has been produced in Los Angeles and London. She's been a Jerome Fellow at the Playwrights Center of Minneapolis as well as a MacDowell Colony fellow. Her plays are published by Broadway Play Publishing, NoPassport Press and Playscripts. Her article on Latina playwrights appears in Latin American Theatre Review. She is a founding member of the Latinx Theatre Commons, where she contributes to The María Irene Fornés Institute. She is an alumna of Chicago Dramatists and of New Dramatists in New York City. Her book, The Fornes Frame: Contemporary Latina Playwrights and the Legacy of Maria Irene Fornes (U of Arizona, 2016), explores the work of six award-winning Latina playwrights. www.annegarciaromero.com