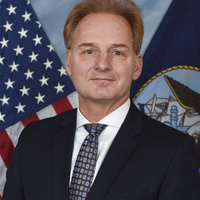 President Heather Wilson cordially invites you to attend a UTEP Centennial Lecture by Thomas B. Modly, the 33rd Under Secretary of the Navy.

The lecture will take place at 4 p.m. Tuesday, Jan. 28, 2020, in the Undergraduate Learning Center, Room 106, on the UTEP campus. A reception will follow the presentation.

Sec. Modly, who has been serving as Acting Secretary of the Navy since Nov. 25, 2019, serves as Chief Management Officer and Chief Information Officer for the Department of the Navy.

He is the son of Eastern European immigrants who escaped from behind the Iron Curtain after World War II. He was raised in Cleveland.

Throughout his tenure, Sec. Modly has focused on increasing agility and accountability throughout the department’s workforce and in vital business operations, including information management, that support warfighting wholeness for sailors and marines.

Sec. Modly created the Office of the Chief Management Officer for innovative, engaged leadership of business processes, data systems, and risk management. He led the creation of the department’s first Business Operations Plan, a planning and execution tool designed for all naval and marine leaders, uniformed and civilian. He orchestrated the efforts of thousands of professionals who completed the first-ever audit of all departmental resources, resulting in millions of dollars of recovered property and increased readiness.

As the Chairman of the Department of the Navy’s Education for Seapower (E4S) Study, Sec. Modly, along with a blue-ribbon panel of national-level leaders, undertook the most comprehensive review of naval education in over 100 years. This study informed key organizational, governance, and policy reforms which will elevate education as a true warfare enabler, and better support the development of strategic and critical thinking so keenly needed for naval leaders in an era of great power competition.

Prior to his current position, Sec. Modly was a managing director with PwC Public Sector practice and was the firm’s Global Government Defense Network Leader.  At PwC, he was the lead partner for the firm’s NATO account and he lead economic development teams in Iraq and Afghanistan in support of U.S. stabilization efforts. Sec. Modly was also the Deputy Under Secretary of Defense for Financial Management, a role in which he drove broad business transformation efforts across the DoD.  He also has over ten years of experience in corporate strategy and mergers and acquisitions in the aviation support and IT services industries.

Sec. Modly graduated from the U.S. Naval Academy in 1983 with a Bachelor of Science degree, with distinction. Upon graduation he joined the United States Navy and proudly served as an UH-1N pilot and an assistant professor of political science at the U.S. Air Force Academy.  He left active duty in 1990 to attend business school and to pursue a career in the private sector. While a midshipman at the Naval Academy, Mr. Modly also attended Georgetown University where he began work on a Master of Arts in Government/International Relations.  He completed this degree prior to starting flight school in Pensacola, Fla. in early 1984.  He also attended Harvard Business School from 1990 to 1992 where he earned a Master’s in Business Administration with Honors with a concentration in Business, Government and Strategy.