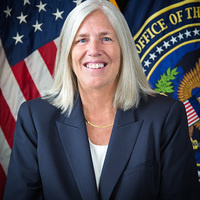 The lecture will take place 4 p.m. Monday, Dec. 9, 2019, in the Undergraduate Learning Center, Room 116 on the UTEP campus. A reception will follow the presentation.

With nearly three decades of experience in the IC, Gordon has served in a variety of leadership roles spanning numerous intelligence organizations and disciplines. Most recently, she served as the Deputy Director of the National Geospatial-lntelligence Agency (NGA) from 2015 to 2017. In this role, she helped the director lead the agency and manage the National System of Geospatial Intelligence. She drove NGA’s transformation to meet the challenges of a 21st century intelligence agency. She also championed agile governance, recruitment and retention of a diverse workforce, and expansion of geospatial intelligence services to the open marketplace. She is known for her commitment to diversity and inclusion, and to the women and men of the IC.

Prior to her assignment with NGA, Gordon served for 27 years at the Central Intelligence Agency (CIA), rising to senior executive positions in each of the agency’s four directorates: operations, analysis, science and technology, and support. She joined the CIA in 1980 as an analyst in the Office of Scientific and Weapons Research, and went on to serve as the Director of the Office of Advanced Analytic Tools, Director of Special Activities in the Directorate of Science and Technology, Director for Support, and ultimately in concurrent roles as Director of the Information Operations Center and the CIA Director’s senior advisor on cyber. In 1998, she designed and drove the formation of In-Q-Tel, a private, nonprofit company whose primary purpose is to deliver innovative technology solutions for the agency and the IC. Gordon has been recognized for her creative executive leadership through numerous awards, including the Presidential Rank Award at the distinguished level.

Gordon holds a Bachelor of Science degree in zoology (biomechanics) from Duke University, where she was the captain of the Duke women’s basketball team. She and her husband, Jim, live in Northern Virginia, and have two adult children who have also chosen to serve their country.