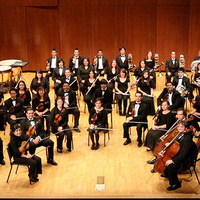 Hailed by the press as “One of the most innovative, even radical classical keyboardists in the U.S.” and described as “Columbia University professor by day, musical sorceress by night,” pianist and harpsichordist Magdalena Baczewska [pronounced ba-CHEV-ska] enjoys a versatile career as a concert artist, educator, speaker, and administrator. Having debuted as a soloist with the Silesian Philharmonic at age 12 in her native Poland, Baczewska performed internationally with the world’s leading orchestras: Philadelphia Orchestra, San Francisco Symphony, China National Symphony, Vancouver Symphony, among others.

Baczewska has appeared in performance with Grammy and Oscar-winning artists, including violinist Joshua Bell, composer Charles Fox (the author of the Grammy-winning hit song "Killing Me Softly with His Song”), and composer Tan Dun, with whom she has toured extensively throughout China and the U.S. Baczewska has performed Tan Dun’s music in such venues as the Tanglewood Music Festival, Guangzhou Opera House, Beijing National Center for Performing Arts, Davies Symphony Hall, and Philadelphia’s Kimmel Center.  At the invitation of the composer, Baczewska also recorded Tan Dun’s chamber music and the Piano Sonata in Shanghai’s Water Heavens Hall.

Baczewska is the Director of the Music Performance Program at Lecturer in Music at Columbia University. She has given master classes and lectures around the world (Beijing Central Conservatory, New York University, International Keyboard Institute, Hong Kong Academy for Performing Arts, Manhattan School of Music). At Columbia, she enjoys a busy academic life, mentoring and providing performance opportunities for the student musicians, teaching Music Humanities (a part of Columbia’s famed Core Curriculum), and working with the Columbia-Juilliard Exchange students in Performance Seminar. As an avid advocate of equal access to music education, Baczewska is actively involved in outreach, bringing music to non-specialist audiences of all age groups, from public school children, to home-bound seniors. She is the author and producer of “Bach@Home,” a series of public-facing lecture performances. She is a recipient of the Outstanding Achievement Award from the Polish Minister of Culture and National Heritage for promoting Polish culture abroad. Baczewska is a Yamaha Artist. This event content is powered by Localist Event Calendar Software.