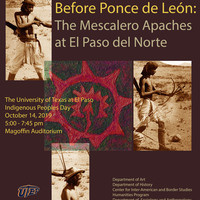 Five distinguished historians and archaeologists will share new research that highlights the significance of the Duranguito neighborhood in El Paso history at a major symposium on Indigenous Peoples’ Day from 5 to 7:45 p.m. Monday, Oct. 14, 2019, in The University of Texas at El Paso’s Magoffin Auditorium.

The speakers at “Before Ponce de León: The Mescalero Apaches at El Paso del Norte” will share their research that shows how a large Apache reservation with up to 1,000 inhabitants existed intermittently from 1778 to 1825 in the area of what is now Duranguito..

Mark Santiago, director of the New Mexico Farm & Ranch Museum, in nearby Las Cruces, discovered a series of Spanish colonial documents and wrote about them in his book, “A Bad Peace and a Good War: Spain and the Mescalero Apache Uprising of 1795-1799,” which was published in 2018.

That information “will require historians of El Paso to completely rewrite the early history of our city,” said Max Grossman, Ph.D., associate professor of art history at UTEP and the event’s chief organizer.

According to Grossman, Spaniards established “peace camps” for the Mescalero Apaches in the late 18th century to keep the Mescaleros from raiding Spanish communities and to encourage them to abandon their traditional nomadic lifestyle to become sedentary farmers. Scholars consider these camps, which stretched from Tucson, Arizona, to Laredo, Texas, to be the first Native American reservations in the Americas. The residents of the reservation at Duranguito – considered one of the largest – separated were organized into five tribal sections led by prominent men within the Mescalero Apache nation.

The symposium’s other presenters, experts on the history and archaeology of the Apaches during the Spanish colonial period, will be Rick Hendricks, Ph.D., New Mexico State Records Administrator; Matthew Babcock, Ph.D., associate professor of history at the University of North Texas; David Romo, Ph.D., borderlands historian; and Deni Seymour, Ph.D., archaeologist of Apache sites throughout the Southwest.

Yolanda Leyva, Ph.D., associate professor of history at UTEP, and Angel Diaz, president of the Academic Revival of Indigenous Studies & Education, will co-host the event with Grossman. The free event is open to the public. Free parking is available at the Sun Bowl Parking Garage.