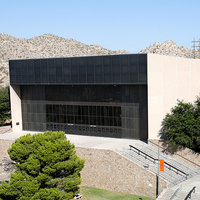 Named after legendary UTEP men's basketball coach Don Haskins, the Don Haskins Center is among the top basketball facilities in the Southwest and Conference USA.

Built in 1976, the Haskins Center features a Robbins Bio-Channel Star maple floor, installed in 2013.  The gameday environment for basketball was enhanced in 2014 with the addition of new scoreboards and video replay boards in the arena.

The comfy 12,000-seat arena offers fans an intimate view of the action on the court.

The game was one of the best i have been to in a while. It was so fun and i also lost my voice! Go Miners!

This event content is powered by Localist Event Calendar Software.